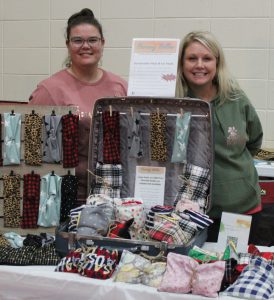 Hundreds of people traveled to Laddonia on Saturday for the Annual Craft and Vendor Fair held in the Community R-VI High School. Members of the PTO said that they always have a good turnout for the event.
“We always have a lot of people that come for the craft and vendor fair,” said Katlyn Cooper. “This has been an annual event longer than we have been here. Some of us were coming to this with our parents when we were little kids. It used to be held during the second weekend in November, but it was moved back because it was in conflict with the opening weekend of the Missouri firearms deer season. It has really grown over the years, and we have close to 100 vendors here today,” she added.
Vendor spaces were $35 and an additional $5 for electric use. There were plenty of food options for those who wanted to grab a bite to eat while they were shopping for crafts. In the morning hours, there were biscuits and gravy for sale. In the afternoon, there was pulled pork, nachos and hot dogs. Many of the vendors had traveled from far and wide to participate in the one-day event.
“I came from Montgomery City,” said Meredith Rodgers. My business name is “Hayloft Artist,” and I am selling original paintings today. I have been painting since I was a year old. I have painted pennies on display here today and cards, but I also do canvas works and have done large murals. I do commissions for paintings and that makes up a large part of my work,” she added.
Among the many different craft booths were skilled wood-working vendors, sign makers and even a special antler crafting booth called “One of a Kind Antler Crafts.” In another section, Casey Powelson was selling homemade salsa.
“My brand is ‘Sunshine’s Salsa,’” said Powelson. “I have been selling this for four years now. I typically sell it at the Pumpkin Patch in Moscow Mills, but I also sell it direct to customers throughout the year on my Facebook page. I do not have products in any stores yet, but I am looking to increase brand awareness. We have had a good turn out here today. A lot of traffic has come through. I can’t say that it will ever be a full-time business, but it has been fun to do just the same,” she added.
Organizers said that the proceeds from the annual event go toward school activities that benefit the students.